As you can guess, there are several ways to protect these electronic and electrical instruments and equipment in hazardous areas. Thus we have techniques such as Explosionproof/Flameproof, Increased Safety, Non incendive and so on. We also have a technique called Intrinsic Safety, which is all what this website is about.

So what is a Safety Barrier?

In Intrinsically safe loops, a safety barrier is present between the “safe area” (non hazardous area) and the “hazardous area” (which may have explosive gases/vapors/dusts present), so that any fault that generates a high energy level, would not get carried over to the hazardous area because of the barrier. Barriers are of  several varieties, but broadly they can be classified as  Zener barriers (passive devices) and Isolators (active devices). 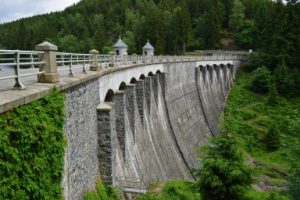 Just as a dam prevents all the water from going from one side to the other (rather it regulates the flow via sluice gates), so also does a safety barrier prevent all the energy from the control room side of the measurement circuit from going over to the hazardous area in the plant, it gets regulated.

Barriers can be of several varieties, but the two main types are Zener barriers and Galvanic Isolators. Both these types have several sub types and literally hundreds of designs. The Zener barrier uses the principle of a zener diode to regulate and limit the amount of voltage and current that is fed to the hazardous area part of the loop. Whereas the Galvanic Isolator also does this, but it also isolates (similar to a transformer). It is also known as a repeater, it repeats the current from one side to the other, upto a certain limit. In no circumstances does it allow higher currents from the control room side to go to the field side.

A schematic of a safety barrier is shown below. Note that the actual wiring will vary according to several factors, such as the type of the transmitter (2 wire or 4 wire), the type of controller and so on. As you can see from the schematic the barrier will stop any excess current from flowing into the hazardous area. For a detailed explanation on how zener barriers work or how galvanic isolators work, please click here. 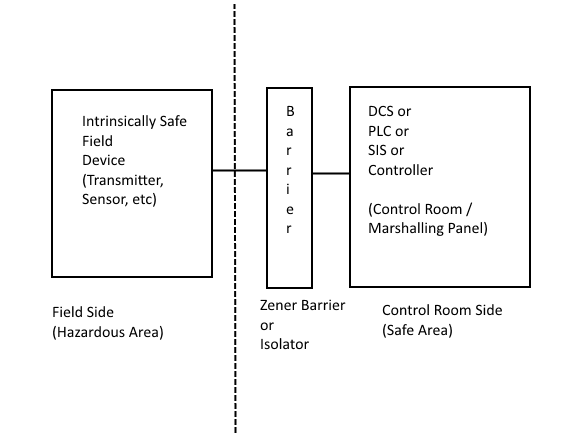